If you missed the deadline and need to register a U11 Atom aged player or older, there is an automatic $250.00 late fee that has been added to the cost, please call the office to get the registration re-opened.
Exceptions:
Registration is still open with no late fees for players new to hockey that do not have a sibling in AMHA in the following divisions:
- U7 Initiation
- U9 Novice
- Recreation
And, for players, of any age, that have just moved into Airdrie, if  above U11, you will have to call the office prior to registering.

Registration for the 2020-2021 hockey season will open  on June June 1, 2020 at noon.  The registration link is at the bottom of this page. Please make sure to review all the information below before starting your registration.  All Existing Members, New Members and Draw Zone members can register on June 1st, but in the event of a wait list situation, preference will be given to  existing members who registered before the August 1st deadline.  (exception for AA and AAA teams)

This year we will have a hard deadline to register of July 31, 2020.  Please make sure to complete your registration before then to ensure a spot for your player. If you register after July 31, 2020 you may be subject to a late fee of $250, be put on a waiting list and possibly not be placed on a team sufficient of your skill level.

Any changes made to registration after August 1, 2020 will have a $75 change fee, so please ensure that you select the correct program for your player at the time of registration.

Make sure to register your player for the highest level of team that they are eligible to try out for.

* The Pay in Full option is not recommended due to the Covid 19 uncertainty at this time.  We recommend choosing the $75 Deposit and 3 payment plan option.

You may be required to pay  additional team fees throughout the season to cover the costs of going to tournaments, exhibition games, bus transportation to away games, dry land, team apparel, team building events, provincials, etc. and for AA teams the monthly coach honorarium fees. These costs should be voted on at the initial team meeting and agreed upon before a team commitment is made.  Many teams will elect to do some fundraising to offset some of these costs.

For funding, subsidy or assistance with the registration fee, please visit the following supporters:

Kidsport, 'No kid should be left on the sidelines'. KidSport Calgary & Area gave 5,647 kids in the Calgary area a chance to have their lives positively impacted through the power of sport, and parents the ability to say 'yes' to organized sport.

Jumpstart 'Help kids play today. See where they go tomorrow.' At Jumpstart, we are committed to ensuring kids in need have equal access to sports and physical activity - an equal chance to be their best.

Lace'Em Up Lace’Em Up is a national charitable program, helping financially disadvantaged children play hockey by paying for registration fees and providing equipment for each child.

If you are going to use one of these services, please call the office prior to registering and before the deadline of August 01, 2020 for the registration code.

Fees are payable by credit card only. If you do not have a credit card please contact the office directly at 403-912-2680.

This year we will only be charging a deposit fee of $75 at the time of registration, plus any prep skate/conditioning camp fees, if applicable, and the tryout fees for the AA & AAA teams.

You can then choose a 3 month payment plan option to pay a third of the Base fee rate, for the division your player is registered in, on August 1, September 1 and October 1. Then, if your player makes a CAHL or higher team ,AMHA will invoice you for the balance owing by November 1, 2020.

If you really want to pay in full,  you will be required to pay that at the time of registration.

If you change your mind, here is the 7.3 Refund Policy.

If you need assistance in obtaining hockey equipment, please visit: Comries Sports Equipment Bank.  They provide used sports equipment at no cost to help low income families whose kids would otherwise be denied the opportunity to participate.  Comries provides an opportunity for these kids to be able to pursue their dreams in sport.

AMHA offers hockey for all ages and levels. Starting with our U7 Initiation program for 5 and 6 year old’s right up to our U18 AAA Midget team that competes at the highest level of minor hockey in Alberta.

Our season starts in late August where we offer Prep skates, as per the Hockey Alberta Intro to Hockey and U11 Atom Pathway requirement before the start of school for our U7, U9 and U11 divisions and optional Prep Skates or Checking Skill camps for our U13 to U18 divisions.

In September we complete Evaluations for all of our players and goalies to place them on the team best suited for their skills and abilities.

For our U7 Initiation and U9 Novice divisions we offer a City league program that has the teams playing each other throughout the season, with options to set up exhibition or tournament games at the team level.

The U7 Initiation program includes 4 pre-season Prep Skates in August and will typically run from mid October to mid March. There are 2 (45 minute) sessions per week which will be held on most Saturday and Sunday mornings.  Full hockey player equipment is required for all sessions.

Tim Hortons supplies each U7 Initiation player in Airdrie with a Timbits jersey that they get to wear for the season. The jerseys must be worn during each practice, game, and tournament that the team takes part in and will be collected back at the end of the season.

The U9 Novice program includes 4 pre-season Prep Skates in August and will typically run from mid October to mid March. There are typically 2-3 (1 hour) sessions per week which may consist of practices, power skating and a game. Most practices and games will be held on Saturday and Sunday mornings with an additional practice mid week.  Full hockey player equipment is required for all sessions.

Our Recreation program can offer another option for people that want to try hockey but don’t have the time to commit to the multiple games or practices a week. The Recreation program includes 1 game per week on Sunday and lots of other fun social activities throughout the season.  AMHA recently received a special grant to fund some of these extra activities for the upcoming 2020-2021 Season.  These extra activities are currently being  worked on but may include Family Thunder Game Night, Halloween Celebration, Christmas Celebration, Valentines Celebration, Power Skating Sessions and End of Season Function.

For our U11 Atom division we have a City league as well as teams competing in the CAHL league where they will travel to other communities within southern Alberta to compete.  Both leagues typically start in October and run till the end of February unless you make it into playoffs which may extend into March. The season will consist of 2-3 sessions per week that include practices and a weekend game(s).

In the U13 PeeWee, U15 Bantam, U16 Midget 15 and U18 Midget divisions, we offer a variety of options. City league, CAHL league for competitive hockey within southern Alberta, SCAHL for AA hockey in southern Alberta, and for U15 and up AAA hockey which is the highest level of competition in the province for these age groups.  Depending on the league, the season will consist of 2-6 sessions per week that include practices and a weekend game(s).  AAA teams are regional teams and are made up of players from a larger draw zone than just Airdrie, Beiseker and Crossfield. You can find the full draw zone area on the Hockey Alberta website under the Players, Male Hockey ADM (AAA) or contact the AMHA office if you are unsure.

In Airdrie our AA and AAA teams are coach picked. This year the new 15-year-old only U16 Midget AA team will be having combined conditioning camp and try outs with the U16 AAA AC Avalanche. Registration for both teams will be the same price and then depending on the team you make you will be charged the difference once teams are finalized.

When trying out for AA teams or higher there are no guarantees on the number of try out skates you will get, you could be released after only one skate.

For Female hockey players that want to play in the female program we also offer teams in the U11 Atom division right up to U18 Midget AA Elite.

Please review our Policies and detailed overviews of the specific Division you are wanting to register your child in to familiarize yourself with how each program operates.  Find our Divisional Policies here. 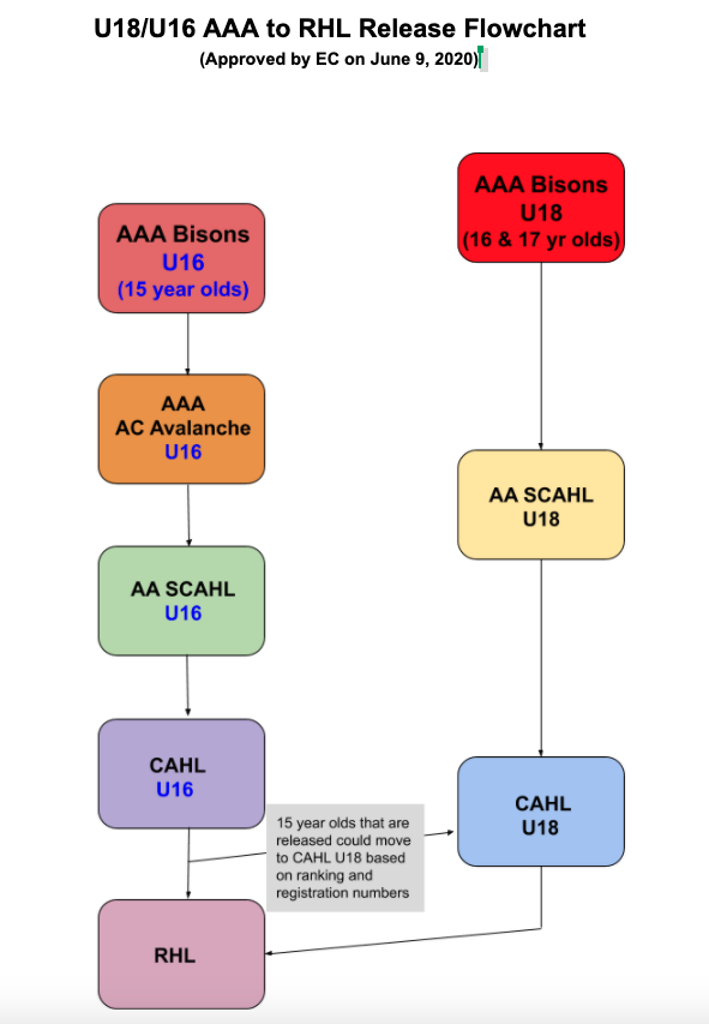 What you need before Registering:

Returning or Existing Players (including siblings)

Players Transferring from Another Association

The system will not allow you to continue your registration until these forms are uploaded, so please have these documents ready before you begin the registration process.

If you now have everything you need to register, please click the registration link below.

If you missed the deadline and need to register a U11 Atom aged player or older, there is an automatic $250.00 late fee that has been added to the cost, please call the office to get the registration re-opened.
Exceptions:
Registration is still open with no late fees for players new to hockey that do not have a sibling in AMHA in the following divisions:
- U7 Initiation
- U9 Novice
- Recreation
And, for players, of any age, that have just moved into Airdrie, however you will have to call the office prior to registration.
Register: 2020 - 2021 AMHA Player Registration